“Death…hurh, what is it good for? Absolutely nothing, say it again…”

ned@thewayofthesquirrelbooks.comDEATH…HUH, WHAT IS IT GOOD FOR?  ABSOLUTELY NOTHIN, SAY IT AGAIN…”

“DEATH…HUH, WHAT IS IT GOOD FOR?  ABSOLUTELY NOTHIN, SAY IT AGAIN…” 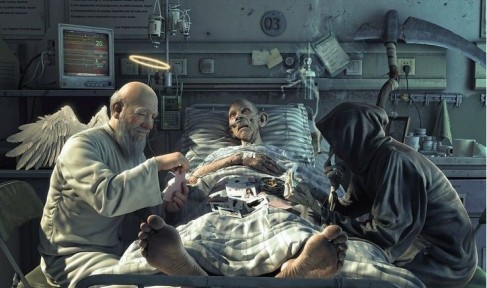 A jolly subject to cheer up an otherwise dull blog…ahem.

This blog was inspired by something my sister reminded me of when she fed back on a recent blog I wrote about growing up.  And it was this:

I can’t remember where or when it was but I seem to remember that our family were visiting the beach one summer and I was standing by the waters’ edge on some sort of jetty or concrete pier.   I was young enough to still need an inflatable rubber ring so clearly could not swim at that point.  For some reason, whether I was encouraged to or just did it of my own accord I do not recall, I just jumped into the water.  Now, being that I was only made from some spindly old pipe cleaners and bits of sticky backed plastic when I was small, I was unable to hold onto the ring as I hit the water and, as anyone who is familiar with the legal system will appreciate, I was sucked under by Sods’ Law.  I had taken the necessary safety precaution of having with me a blow-up rubber ring and still this was not enough to protect me from Death’s cold hands as he brushed against me in what can only be described as a low budget, poorly directed scene from Final Destination.  I was fortunate…my sister saved me from the water.  It was something I had completely forgotten about though my sister still recalls it to this day possibly due to still awaiting the medal or box of chocolate she feels she has earned for such a deed.

This is the first encounter I may have had with Death and, although it may not have been that I actually met Death that day, I at least feel like he left me an answer machine message or a text.

This would not be my only mishap when I was young.  I once overdosed on sleeping tablets thinking they were sweets, I believe my brother may have dropped me on my head during a thunder storm and also a fire safety guard fell on me once.  I’m not sure if the guard was iron but there was certainly some amount of irony involved in having been injured by a safety guard.  Also I motioned to leap from an open-backed double decker bus in London once before it had stopped and my brother grabbed me and pulled me back in.  As I was moving backwards my initial instinct was to snap at him…until the huge tree that I would have hit flowed quickly past me.  I may have been unlucky in love when I was younger but I was certainly lucky in life!

Before I joined the Fire Brigade I worked for the Railway and was based in Romford at the time.  My supervisor, like a few of the others at the time, had a serious issue with drink.  To cut a long story short he sent me up onto a live overhead wire to begin doing some work on it.  I leaned my wooden ladder up against the metal pylon, climbed up and rested my arm against a line of insulating pots between me and the live wire.  I looked down and realised that the pots were ‘tracking over’ to my jacket, i.e. sparks were coming from the live wire.  For those who aren’t aware, the reason there are ceramic pots on pylons is so as to insulate them from the metal structures on which they stand and every time they try to ‘track’ towards the Earthed pylons they lose an incredible amount of energy as they jump from ceramic pot to ceramic pot.  So you can imagine that the fact that the live wire was still trying to track over to me didn’t sit well with me.  I climbed back down the ladder and went over to speak to my supervisor.  As I did, a train came through and knocked our ladder down and the metal pulley that was on the ‘neutral’ section of the wire exploded as it was now powered up by the passing train.  Death had sent one of his messengers to greet me that night in the form of a drunk supervisor.  Unfortunately for Death his messenger was so drunk he screwed up the plan, idiot!

Having served in the Fire Brigade for over twenty years now I have had, along with most of my other colleagues, my fair share of near misses.  And with all the safety precautions in the world to protect us, fate still has that way of trying to trip us up.

I remember once putting out a fire that was in a skip.  My Officer in Charge had asked the owner of the skip, about three of four times, if there was anything in there that we should be concerned with.  “No” he responded every time.  I began putting the fire out and was pulling a ceiling hook through the rubbish to move it around so that we could get water into all parts of the skip.  A colleague of mine, Chippy, asked me something so I turned to respond.  As he did there was a huge bang and fire leapt upwards out of the skip.  I turned to see what it was and was faced with a tall mushroom type fireball as the cylinder that had just exploded went tumbling off into the air before landing loudly against a nearby path.  Oddly, It did not make me flinch at the time and I just accepted it as being a lucky escape.  Our Officer in Charge however had managed to board the appliance and had rigged in his full firefighting gear in a matter of seconds and was panting heavily as his face turned ever paler.  Perhaps when the explosion occurred we had been too close to it to appreciate its size or to see just how close we had been to it.  Again, I called Death that day, but fortunately he did not pick up.  There have been several occasions like this that have punctuated my Brigade career.

The thing is, I’m not religious.  I don’t believe that we actually go anywhere after we leave this mortal coil.  I believe that we simply came from dust and it is to there that we will finally return.  But I truly believe that the miracle of life is in the fact that we are even here at all.  I believe that when we are returned to the Earth our energy is merely transformed into a different state so in some ways we do not die at all.  And yes I know that that might sound a little bit like it’s based on a crazed LSD flashback but far from it.  It’s mere science.

I have seen the result of Deaths’ cold embrace many times in my career.  The first time was soon after I graduated from training school.  My Station Officer at the time fetched me over after a house fire had been dealt with.  The occupant, an elderly lady, had not been so lucky and my Station Officer wanted me to see her.  It should be noted that this was not some morbid ritual or prank but merely him getting me accustomed to what I might need to deal with further into my career.  I went into her lounge and I remember seeing her lying there.  She actually looked quite peaceful and the thing that struck me was that I did not feel sorry for her.  I know that sounds odd but just by looking at her I could tell that ‘she’ was no longer there.  Whoever she had once been was no longer in the room and what was left was but a waxwork of her former self.  That feeling and image stays with me even today.

I also remember being called to a property in Plaistow, London one time to an ‘Elderly lady collapsed behind door’.  At that time it was felt that I was svelte so I was asked to climb into the top bedroom window to try to go and assist her.  I remember going down the stairs and seeing her laying quite peacefully at the bottom.  I was telling her that I was from the Brigade and that I was there to help.  The one thing that struck me was that she was just as confused as she was put out.  Her whole expression and tone led me to believe that she had made her peace.  She had come to terms with the fact that no one was going to come to help her and she seemed quite at ease with that.  Her name was Rose and I always promised myself that I would remember her name.

All of my Grandparents died when I was relatively young, my Mum passed away around 1996 and my Dad passed away a few years ago.  I miss my parents but I don’t mourn for them.  They had their lives.  Now others have theirs.  It is the natural order of things which has made us the species we are today.  Without death there cannot be evolution and, who knows, perhaps with evolution we may even one day progress so far as to no longer need to be bound by life’s cycle. 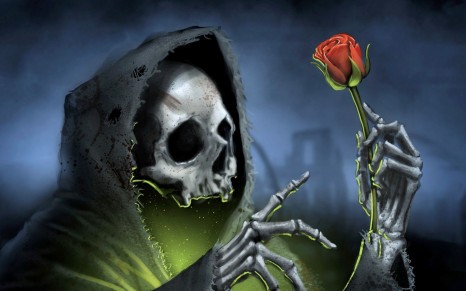 Now don’t get me wrong, I’m not blogging these things as a form of p***ing competition. There are plenty of other people who have had far more dealings with Death than I.  Others even have much more potentially dangerous encounters and sometimes have them on a much more regular basis. I merely wanted to point out where I’m at with it and why.  As a consequence of all this I am fairly pragmatic about Death.  I am not fearful of it.  Whether or not that is because it looks so far away from me right now I do not know but I hope that when it is time for Death and I to again meet that we might meet as old friends.  And, though I may or may not, go into that good night as gently as I now profess to, I do know that I have a rendezvous with Death.  And, it may not be at some disputed barricade but, either kicking and screaming or going gently, to my word my pledge am true, I shall not fail that rendezvous.

If you have any, questions, feedback or views, please feel free to leave them in the comments section or, alternatively, contact me via ned@thewayofthesquirrelbooks.com

← Interview: Meet and Greet Monday – Blogger: Inside the rainbow

4 thoughts on ““Death…hurh, what is it good for? Absolutely nothing, say it again…””