REVIEW: THIS BLOG IS ALL ABOUT MY “WICKEDUNCLE”. Well if that hasn’t got your attention then I don’t know what will!

I recently replied to a social media call out to Bloggers who were interested in reviewing a website as part of a site/toy review program.  I responded because I thought it might be fun to test my reviewing skills and because I also liked the look and tone of the advert and, once I looked at the website in question, I actually liked what I saw.  The review is of a website that supplies toys and so as to be able to adequately review the site the organisers arranged for the reviewers (including myself!) to be able to order a few items from their site but, please be aware, I’ve been given no financial incentive nor am I employed in any capacity by the company.

So, below you will find my review and I hope it is of some use for anyone looking to buy gifts for children of friends and family.  Anyone who knows me or reads my blogs will know that I’m fairly open and honest about things and that I will tell it how it is…so for anyone who hasn’t the time to read this review, let me summarise, go to wickeduncle.co.uk and check them out for yourself!

wickeduncle.co.uk is a gift service for Birthdays, Christmases and other occasions.  Their site is not just aimed at parents but moreover at Uncles, Aunts, Godparents etc. (hence the name by the way for anyone who was wondering.)

The site itself is a breath of fun-scented fresh air.  I really am tired of sites that try to cram as much information into every single one of its pages.  Instead, wickeduncle.co.uk has a clean, uncluttered, easy to view format with only essential or relevant information displayed.  The child-like cartoon look is easy on the eye and adds fun to what is already an easy to navigate site.  Gifts are divided into suggested age ranges but are also divided into such categories as BRAINIAC, OUTDOORSY, ADVENTURER etc.  This makes finding a present really very-very simple and, for someone who may be buying gifts for other peoples’ children, it certainly eases the process.

It also includes a search facility and contact details including social media links.  The whole site exudes a sense of fun including randomly placed jokes that could only be told by soppy uncles, silly Godparents and daft Grandparents.

There is a wide range of toys aimed at both boys and girls of all ages and all seem reasonably priced.  Many of your children’s chosen careers have also been catered for like dinosaur hunter, scientist, Firefighter, chocolatier, cheesemaker and zombie wrangler to name but a few.

Having selected my items I then made my way swiftly to the CHECKOUT.  On route, for an additional price, I was given the option to select from a variety of wrapping papers in which to have my gift delivered, was asked if I would like to include a card, was given the option to complete it with a message and was then given a choice of delivery methods.  I was also given the choice of paying by credit card or via Paypal.  Another thing I didn’t realise at first was that, when I used wickeduncle.co.uk, my purchase was covered by google as it is a Google certified shop.  This adds a further level of protection cover for the purchaser.  Well who would have thunk it?!

The delivery process did exactly what it said on the tin, or in this case, website.  The items arrived on the date promised and were actually quite well packaged.  A lot of online shops these days seem to simply place your items in a box and tape them up whereas wickeduncle.co.uk used a form of bubble wrap.  This is something that a lot of the larger online firms these days, “yes Amazon I’m looking at you!” often forget, or simply don’t bother, to include.  Also, unlike many other delivery services, wickeduncle.co.uk asked where I might want my package left if I was out.  I know that might sound like a little thing but not having to time a particular delivery for when you just happen to be off work is very much a Brucie Bonus!

THE TOYS THAT I ACTUALLY ORDERED

Disclaimer:  Please note that I ordered these toys merely in the name of website reviewing science.  I got no pleasure from having to read my padded dinosaur book under my blankie in bed (don’t you judge me!) nor did I get any satisfaction from having to make bread in a flower pot and then having to risk life and limb by stuffing my face with bread for the sake of thorough journalism (and in the name of shear gluttony).

This book actually surprised me.  It was, as you’d expect, full of fun facts and general information about dinosaurs but it also came with the option to download a companion App called iCarltonAR (Available through either the Apple store or Android play store) which works when used in conjunction with the book.  Once downloaded to your phone or tablet you can then point your mobile device at the book and it will display a moving 3D image of one of a few different dinosaurs, incorporating the devices’ camera, as if it is sitting on the book.  Some may be familiar with this effect as it is similar to the augmented reality system used in such games as Sony’s Wonderbook.

For being both a book and an interactive experience this gets a big thumbs up from me.

Wow, that’s actually my hand under there!  This image was captured in-app.

The good thing about these pets is that they don’t need feeding and you don’t have to clean up poop after them. 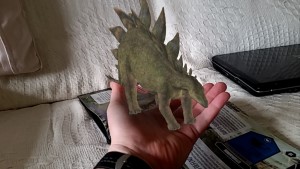 This is a cube that is able to be turned ‘inside out’ and flipped around to reveal different dinosaurs on each cube face.  These cube faces then show facts and figures about each of the dinosaurs.  Again, good fun and, my son being a dino fan, he really liked it.  Also, a little thing, but he enjoyed the tactility of changing the cube around too.  My son has been diagnosed as being on the ‘Autistic Spectrum’ so the feel of it was as important to him as the information printed on it.

Is it me or should these be called “Flour pot bread making kits”?  No?  Just me then?  Ahem…

So, this is a set of four terracotta flower pots, a bread mix and instructions.  Simple. Silly. Fun.  But, you know what?  I’m all for anything that helps children learn and I’m all for anything that encourages children to learn how to cook too.  The thing I like about this is that again it’s an interactive toy.  I know it’s a fairly simple premise but aren’t most of the best ideas often the simplest?  Not only do you get to enjoy showing your children the fun of making dough but also you can all (or both) then sit down together and enjoy the toils of your labour with a nice knob of melted butter and your favourite topping.  (Please note, butter and topping not included.  The value of your flower pot loaf may go up as well as down and also, no running in the hall, especially with scissors!)

I really enjoyed this little present a lot.  It’s interactive, again quite tactile, and certainly a simple lesson in cooking for your children that won’t take up too much time so will hopefully be achievable within most attention spans.

“Here’s one I prepared earlier.”

wickeduncle.co.uk has a twitter and blog presence which they not only use to promote their site and toys but also use to suggest some good ideas for gifts.  They then also give more details about these gifts and their suggested uses.  wickeduncle.co.uk also uses social media in order to release its’ silly jokes, like flying cheeky-monkeys, unto the unsuspecting virtual world.

To be honest, I took part in this bloggers’ program because I thought it would be a nice way to test my reviewing skills as a blogger.  I also liked the way wickeduncle.co.uk approached the bloggers’ program and, as such, I was inspired to take a closer look.  As part of this process I have spent a lot of time trawling their site.  I have read many of the reviews about them and looked at most of the toys available.  And what I’ve found, if I’m honest, is that this website is actually something a little bit special.  It’s actually a site made up of people who seem to genuinely enjoy what they do and they do it in a very simple, fun and entertaining way.  They seem to ‘get’ toys and have constructed a nice easy method for navigating their site in a number of different ways to suit many budgets and for wide a variety of occasions.  The site is peppered with randomly placed soppy jokes that only a wickeduncle.co.uk would tell of which some are funny and others are Christmas cracker ‘funny’ but all are silly and add to the genuine sense of warm fun that the founder and his elves are clearly setting out to achieve.

I’m British and, as such, love a good moan so was slightly disappointed to be so let down by the opportunity here to do so.  Reviews are often more fun to write and to read when people are moaning about things and sometimes really sticking the knife in.  On this occasion though I really can’t find much wrong with this site or its products and I would honestly recommend it to others.  I look forward to seeing how wickeduncle.co.uk continues to expand and will keep up with its blog in the future in order to be able to keep up my back-catalogue of soppy jokes with which to ‘test’ my nieces’ and nephews’ patience because, after all, there’s a little bit of wickeduncle.co.uk in all of us.

← A short rant: About crap modern television and how it exploits our children
The book: Existential Anger – by Ned Alexander →