Coming out…as being a vegetarian (Or Quorn to be wi-i-i-i-ilddddd!) 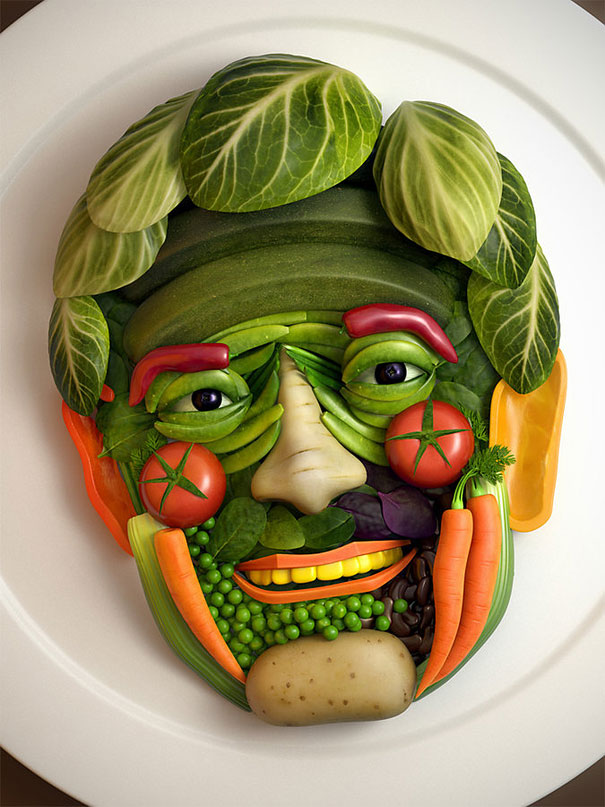 Okay, so let me get this out of the way first.  For any Veggie/vegan police out there interrogating online vegetarian based blogs and posts, the truth is…I eat fish.  There, I said it, okay?  I eat fish but I do not, contrary to some people’s assumption about vegetarians, eat chicken and I only say that because when I stated to someone once that I was a vegetarian they then asked, “But you do eat chicken, right?”  I just looked at them politely.  “Well…er…no.”  “But that’s white meat, do you not even eat that then?”

On a separate occasion I was asked by another person, whilst at their home, if I would like something to eat.  “We’re having pizza.”  She said.  I looked down at the pizza that she was about to put in the oven for her and her husband.  “Er, that’s okay thanks.  I’m a veggie, remember?”  I said with a smile.  She looked at me puzzled, “But this is veggie I think.”  I screwed my face up “Er, no it’s not.  It’s got meat on it.”  I pointed to the small round slices of meat on the pizza.  “No…” she said amused, “That’s not meat, that’s pepperoni.”  I politely nodded and quietly backed away to allow her husband, who had begun laughing like a hyena, to point out her minor veggie faux pas.

So, of course, I understand that not everyone knows every single little thing that goes into their food but the fact that she genuinely didn’t realise that pepperoni didn’t actually grow on trees was something that really surprised me.  But then, perhaps that’s just a modern everyday problem.  Perhaps we’ve just become so far removed from the processes that gently redirects animals from the fields, via nasty-pointy-sharp-shreddy-grinding-machines, to our plates that some of us simply don’t know what pepperonis look like when they’re freely running around in the wild, or perhaps some have never enjoyed the sight of wild burgers chasing each other gayly across wind swept plains.  But, I digress.

The reason I still eat fish is mainly through force of habit really.  To be honest I still don’t like the idea of having it whole, and seeing it staring at me judgementally, and also I don’t eat any seafood other than plain fish.  The reason I eat fish is because, when I first decided to give up eating meat, I thought it best to not give up everything all at once in case it was too much of a shock to my system, physical and mental, and also because in those days things like Quorn etc. were not as readily available.  Since then I’ve continued to eat fish but there are times when I still think about giving this up too and I expect that one day I probably will.  Certainly when I first gave up meat I don’t think I would have been able to give it up for long had it not been for such good meat alternatives in the form of Linda McCartney foods and other similar products.  I know, people find it odd when I say I like meat replacements but when I gave up eating meat it wasn’t because it repulsed me it was because I was concerned about the amount of steroids and antibiotics that were being pumped into it.  Also I don’t like the way animals are treated when they are being farmed and slaughtered but…hey ho.  Coincidentally when I was first thinking about becoming a veggie I got food poisoning twice in that same month, from meat, so, you know… (Actually one of those times was from a Mcrib sandwich so technically I was only poisoned once, the second time I was ‘McPoisoned’).  As I said though, I did like meat and being able to have decent replacement pies and sausages etc. made a huge difference to me so I was very grateful to the late Linda McCartney for producing the foods that she did.

I’m not a born again veggie.  I cook meat for others and would not expect a guest to eat the same food that I eat if they came to dinner at ours.  I do understand that some vegetarians are uncomfortable with handling meat or even being near it and I respect that but for me it’s not an issue.  Also, to be frank, if I found myself swept up on a dessert island one day and all there was to eat were animals then I think that my survival instinct would override my desire to lead a vegetarian lifestyle.

Often when I’m out with people I know they will try to find restaurants or cafes etc. that offers a veggie option.  This can sometimes lead to us trapesing around a few eateries before we eventually settle on one where companions deem it acceptable for me to eat even though all along I have tried to insist that I don’t mind eating anywhere and that I’ll certainly find at least one thing on any menu that I can enjoy (or at least tolerate for the sake of good manners).  I know they mean well but it highlights an otherwise unimportant problem for me.

I was taken by a friend once to eat in McDonalds.  Even there they do something that professes to be vegetarian, though for goodness sake don’t look at the small print…seriously.  It was fairly early so I ordered a ‘Big breakfast’.  For those who have never eaten a McDonald’s big breakfast, imagine what you would consider to be a big breakfast then imagine that breakfast a very long way away from you so that you can barely see it.  How you imagine that distant breakfast to now look is how the Big Breakfast actually looks when you remove the Mc-lid from the Mc-polystyrene container it comes in.  Well, anyway, I asked for one without meat.  This was far too complicated a request for the McDonalds guy who, in his confusion, began to bang his club and smack the back of his hands against the counter.  He scratched his pronounced forehead and did the best he could to deliver my order.  “Sorry mate.  I asked for no meat.”  I politely and patiently mentioned.  The young man scratched his head, took my order away again and a few minutes later returned with what I actually ordered.  However…I opened the Mc-lid again.  I paused long enough for my initial rage to subside then looked up at him once more.  “Mate, this is the same meal but with the meat taken off of it.”  “No Sir, no it’s not, it’s a fresh one.”  I beckoned for him to lean forward so he could see into the Mc-polystyrene container.  “So then why is there a big round splodge of grease the same size and shape of the greasy piece of meat that was on my last breakfast?”  The McPrick then treated me to a Mc-Shrug on the house.  I then marched up to the manager and practised my Anglo-Saxon on him.

Being a vegetarian in the fire Brigade has had its’ moments too.  Firefighters seem to understand it a bit more these days but a few years back when Firefighters insisted on continuing to call themselves Firemen (years after the term had actually changed) learning of my decision to be a vegetarian was a big issue for them.  It annoyed some of them because it meant that I was ‘different’.  So much was this an issue in fact that one day when I went to work at a nearby station for the day to cover a shortfall in personnel I was made to sit down in front of the whole watch and ‘explain myself’.  When I arrived I told them that I wouldn’t need to be catered for as I’d taken in my own food.  When they established that the reason was that I was a veggie and didn’t expect them to cater around my needs I think it sent a shockwave of fear around the mess table.  I was made to sit down and explain my actions as ripples of panic still rumbled slowly and inexorably across their faces.  Now I wouldn’t even entertain such a conversation, though the Brigade (or Service as it’s now known) is a very different beast these days.  Then though I was still fairly new to the job and, at the time, felt obliged to sit there and explain myself…for daring to be different.

I’ve never encouraged my wife to be a vegetarian nor have I ever discussed it at any length with my son.  We all must make our own decisions in life.  My wife eats very little meat and follows my diet usually and I certainly don’t judge her for not wanting to give it up.  It’s how she was brought up…and of course I too was brought up eating meat.  And of course almost all of our foods have some form of meat in them from milkshakes to sweets, from medicines to some pies that slightly inaccurately describe themselves as having 100% meat in them.

Sadly however, most of the foods we do eat these days are likely tainted with chemicals or additives of some kind or another anyway.  Organic foods are a good source of (hopefully reliably) safe food of course but not all foods are available in an organic form and when they are they’re still sometimes outside of some budgets anyway.

← When my humour falls flat…doh!
An open letter: To parents whose child is ‘different’. →