The power of cakes!* 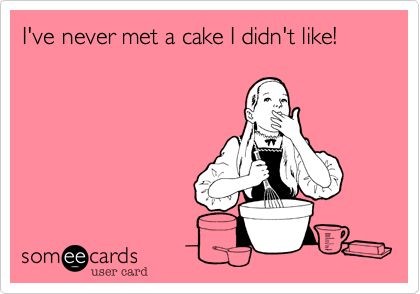 When I was deciding what topic to discuss in this particular blog, I seem to remember feeling awkward about something and wanted to apologise for it but I can’t for the life of me remember what that was now so instead I shall be dedicating this blog to the humble cake and not, as initially intended, humble pie.

The power and importance of cakes throughout our history are issues not to be sniffed at. Trust me, I’ve tried it, you just end up with cake crumbs all up your nose.

THE HISTORY OF CAKES

Cakes were invented a long time ago. I’m not sure if it’s been proven exactly what time in our early history people first began making cakes but I certainly remember when I was younger that our local bakers always had them in the window and that was over 40 years ago so it was certainly some time before then.

Throughout time cakes have subtly and covertly infiltrated our psyche and into all parts of civilisation. Someone is born, we bake a cake, someone gets married, we bake a cake, in fact, that person who was born a few commas ago then dies…we bake a cake. Actually any opportunity, or excuse, we can find as people to console ourselves, celebrate something or mark it in anyway and we simply invent or consume a new cake. Even with my own friends, if there was ever a time when I’d known they were coming I’d have baked them a cake. Moreover, if they hadn’t informed me before hand to give me time to prepare one then, when they arrived, I’d stand at the door rebuking them in song form.

So much has the invention of cake moulded our societies that we even mark most notable historical events with the production of a new style or variety of cake. The Victoria sponge, created to mark the resolution of the bloody Victoria Park bicycle path uprising of 1885 organised by “Farthings for Justice”. The Dundee cake to celebrate the end of the Tattie Scones war of 1747 and even the Neapolitan ice-cream, though it should be noted that this was later disqualified as a cake by virtue of the fact that it was in fact an ice-cream as was even confirmed in the name.

In 1915 Robert Baden-Powell began an education program for young girls to show them how they might survive in the wild if caught outdoors. To honour this cake safety awareness, the group was named “The Brownies”.

In 1927 the Jaffa cake was invented. The, then, Prime Minister and part time impersonator Stanley Baxter immediately imposed an inheritance tax upon it, famously quipping at the time that “McVitties were taking the biscuit by expecting not to have to pay the inheritance tax that is applied to all biscuit products”. McVittie later proved in a court of law that Jaffas were in fact, without legal doubt, cakes and Baxter was soon forced to retire to his bed for the evening.

In the 1930s the Gangster John Dillinger was famed for escaping prison using nothing more than a gun he had made from a bar of soap, some old loo rolls and some sticky backed plastic. However his lesser reported first attempt at escape ended unsuccessfully.  Dillinger brilliantly planned the escape bid by arranging for his lawyer to bring a cake to the prison within which a file would be concealed that Dillinger could later use to cut the bars with. This cake was to be sneaked past the guards in the lawyers own case. Upon slicing into the cake Dillinger discovered that the lawyer had, due to a mix up with emails, not understood the brief, and had instead put his case files in the cake instead.

England, 1938 and Prime Minister Chamberlain has just returned from a meeting with Germany’s then head chef, Adolf Hitler following talks to avoid a second Cake recipe war. Hitler had been pressing for Britain to join them in their campaign to dominate the European cake market and had insisted Britain hand over any recipes that may turn the tide after having been fobbed off with recipes for basic pies during The Great War. Chamberlain returned and defiantly held aloft a recipe for Eccles cake declaring that “I believe it will be Pies in our time!” It was not until 1939 that Germany increased pressure on Britain claiming that British cakes were substandard, and all too often, under baked. Chamberlain’s patience eventually buckled and he declared famously “I have to tell you now that no such under-baking has been perceived and consequently this country now is at war with Germany.” 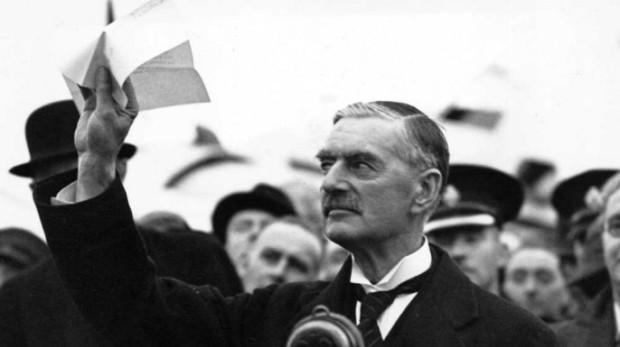 In 1987 the growing popularity of the Genoa cake reinvigorated the comedy circuits of Great Britain and brought refreshed interested in some whose careers had been carried for too long on the joke:

“I went on holiday to the Caribbean with my wife recently.”

The reintroduction of the Genoa cake soon inspired a new generation of upcoming alternative comics who capitalised on its’ success by reinventing the Jamaica joke with:

“There’s a lovely looking woman over there eating cake by the bar.”

In late 2004, Britain’s Labour Prime Minister Tony Blair feared that the waning popularity of cakes in society would lead to a backlash in the upcoming elections. Desperate to re-bolster public interest in the British cake industry the Government approached Guy Richie to produce a public information film to self raising awareness flour. Having publicly funded the project, the Government found themselves ultimately disappointed with Richie’s underworld interpretation of the problem so tried, unsuccessfully, to block the distribution and screening of Richie’s Layer Cake film. Ironically that year Richie enjoyed quite a profitable slice of the cinema market. (It is rumoured that so impressed was the actor Depp by Richie’s interpretation of the subject matter that he was later inspired during his portrayal of the character Captain Jack Sparrow to utter the now-famous line “But where’s all the Rum Cake gone?”

In 2012 a manageress named Marie almost inadvertently started a riot in a California branch of Starbucks after it was reported to her by one of her staff members that the customers were not happy due to all the sandwiches having run out during the busy lunchtime period. Her off the cuff remark of, “Let them eat cake.” would later haunt her and led to her eventual personal battle with alcohol abuse. It should be noted that, though all of the customers later confirmed at the trial that they liked cake, it was more the principal that had upset them and that had sparked the inevitable civil disturbance that followed.

THE POWER OF CAKES

History has taught us that empires have been built and lost through the power of cakes. They have been a part of our culture, part of our heritage since civilisation began and all significant moments throughout time have been influenced by them in some way or another, from Richard Harris getting overly upset and singy that he’d left his out in the rain, to the farmers cake scandal of ’85 when it was discovered that they had been illegally concealing ingredients like carrots and low fat cheese into mixes and palming them off as full fat cakes.

Ɨ As for my own experiences with cakes, I can certainly vouch for the fact that the Fire Brigade runs on them and without them the emergency services would likely grind to a veritable halt. When I joined my first watch I had to buy cakes, when I left to go to another watch I had to buy cakes. When I got married I had to buy cakes. In the Brigade if you blow your nose, scratch your bum or do anything out of the norm, you have to buy cakes. I was even standing by at Wembley Fire Station one day on an ‘outduty’ when a member of the following watch walked into the office where a few of us were congregated. He looked a bit down so one of his colleagues asked him what was wrong. He said that he had been burgled the night before while he was on night duty. His colleagues asked if it was the first time he’d been burgled. He nodded and then everyone cheered and declared “YAYE, FIRST TIME BURGLED CAKES!” And though this actually seems quite callous and unfeeling, I know from personal experience that the Brigade not only thrives but, moreover, survives on such banter. We get ourselves through the hardest of times with moments like this, we bolster up each-others’ moods with our banter…a cup of tea…and a big f**k off slice of cake. So for any of you currently looking at yet another piece of cake, stop thinking about it and dive in. If it’s good enough for the Emergency Services then it’s good enough for you. Mind you, it might be worth getting up and checking that smoke alarm while you still can though, eh. 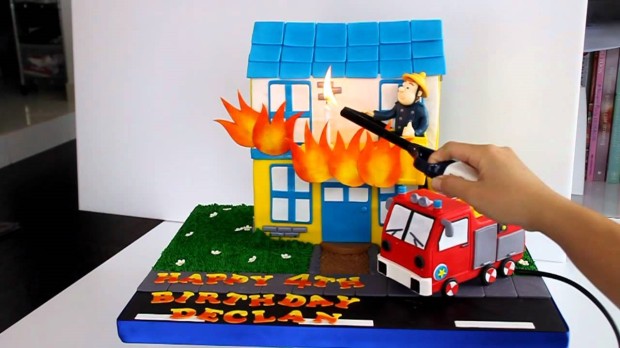 And, as much as you may have decided you like cake, never let it gateau to your head!

* It should be noted that this particular blog has been extensively researched and all of the facts within it are completely accurate and I know this to be true because I made them all up myself. So there!

Ɨ This part of the blog actually happened. I know, what the…

← The successful career as a cartoonist I never had.
Memories of 9/11 →